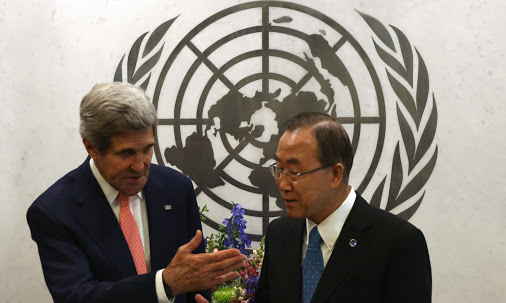 The paralysis over Syria is yet another sign of the dysfunction within the United Nation’s Security Council. The Council is supposed to prevent large-scale violence and occasionally sanctions military action to do precisely that. The fact that the decision for making this call is limited to just five of its members — Britain, China, France, Russia and the United States — is an historical anachronism. It reflects a division of power agreed at the end of the Second World War that no longer accords with reality. And while diplomats from the other 188 members of the United Nations grumble away, no one seems to know how to break the deadlock.

There are countless reasons why the Security Council needs reforming. One of the more compelling is that its lack of meaningful representation undermines its legitimacy. Take the case of peace support operations. Peace-keeping mandates intended for the so-called “global south” are drafted by a Council that unashamedly excludes the vast majority of troop-contributing countries and mission-hosting states. Not surprisingly, governments and civil societies at the sharp end of these missions — especially in Africa, the Americas and Asia — are demanding a greater say in decisions that affect them. Questions of international peace and security are frankly too important to be decided by five countries alone.

Reform is a life and death issue for many civilians around the world. This is because the Security Council is the primary arbitrator of international peace and security, including sensitive questions related to the use, and limits, of force. In some cases the Security Council is side-stepped altogether by its permanent members. The bombing campaign in Kosovo during the late 1990s was conducted without United Nations approval. More controversially, in spite of much arm-twisting, the U.S.-led invasion of Iraq in 2003 was launched without authorization by the Council. Even former Secretary General Kofi Annan later declared it illegal.

Yet many more forceful interventions in the world’s hot spots were sanctioned with the imprimatur of the Security Council. The United Nations has approved at least 68peace-keeping operations since the late 1940s. Almost 100,000 peace-keepers are currently deployed around the world trying, often in unimaginably harsh conditions, to keep the peace. They do so impartially, on the basis of consent of the parties, and with clear proscriptions over the use of force. Even so, certain decisions of the Council continue to be controversial, confirming anxieties about its lack of representation and potential for abuse.

For example, the Council mandated NATO-led operations in Libya starting in March 2011, ostensibly to protect civilians at risk of being killed by President Muammar Gaddafi’s forces. Some UN member states, Brazil among them, felt that the Libyan mission went far beyond its mandate to “protect civilians” and amounted instead to regime change. During the negotiations in the weeks before the campaign, permanent and non-permanent members of the Council — Brazil, China, Germany, India, and Russia — abstained from the resolution authorizing force. Brazil went one step further in September 2011 calling for “responsibility while protecting.” The effect of Brazil´s proposal on many other United Nations member states was electric. In demanding more checks and balances over peace operations, Brazilian diplomats were trying to resolve the age-old question: “Quis custodiet ipsos custodes?”

At the center of Brazil´s proposal is a call for greater accountability over Security Council decisions and the tightening-up of oversight over missions once they are agreed. While a welcome contribution to the discussion, it is not entirely without precedent. In fact, it builds on an earlier construct — the so-called responsibility to protect (R2P) — floated more than a decade ago by a Canadian-led international commission on intervention and state sovereignty. The R2P concept highlights the duty, the responsibility, for states to intervene — including with the possible resort to force — in extreme cases involving genocide, war crimes, crimes against humanity and ethnic cleansing.

So, what more can countries like Brazil do to press the case for Security Council reform? A new publication coming out on World Humanitarian Day on 19 August bythe Igarapé Institute and the Brazilian Center for International Relations outlines a few possibilities. Rather than walking away from it, Brazil should double down on the responsibility while protecting concept. Brazil could set up an independent committee to review and clarify the United Nation’s humanitarian and human rights-related responsibilities in the wake of intervention. It could propose constructive ways to bridge the accountability deficit that so often emerges after blue helmets are deployed to societies wrecked by conflict. Instead of shouting from the sidelines, Brazil and its allies can set out a positive vision for reform with concrete guidance for how the international architecture can be fixed for the better.

Robert Muggah is the research director of the Igarapé Institute, in Rio de Janeiro and a Principal of the SecDev Group. Conor Foley is a humanitarian aid worker based in Brasilia.