Ottawa was abuzz last week as over one hundred participants undertook Canada’s first-ever #HackingConflict Challenge. On May 27th, 2015, a bevy of diplomats, students, techies, and NGO representatives arrived at the Canadian Museum of Nature, prepared to creatively “hack” real world conflict. The goal was to consider, and later pitch, how social media, big data and/or new technologies can be leveraged to hack through the fog of war and empower those seeking to transform conflict – all in less than 48 hours. One can only imagine the amount of coffee consumed at this event…even I had more than my fair share of caffeine and I was merely an observer!

Each of the six multidisciplinary teams was assigned a theme, respectively, focused on addressing the ongoing conflicts in Syria and Ukraine, or emboldening select UN resolutions. The challenge itself, however, was open in scope – teams were free to choose the direction of their idea, whether policy-oriented, action-seeking, and/or technologically-inclined (e.g. leveraging an app). With the diversity of participants at the event, it was no surprise that there was a range of innovative ideas emerging on all fronts. From the use of crowdsourcing in detecting the Syrian barrel bomb supply chain, to the youth-inspired gamification of the crisis in Ukraine, to the creation of an SMS/phone call service that directly connects sexual violence victims to first responders in the Democratic Republic of Congo (DRC), teams produced thought-provoking concepts with real world applicability. As if my personal amazement wasn’t confirmation enough, Canadian Minister of Foreign Affairs The Honourable Rob Nicholson and his Dutch counterpart The Honourable Bert Koenders joined us that afternoon and commended the teams on their imaginative and interactive solutions. 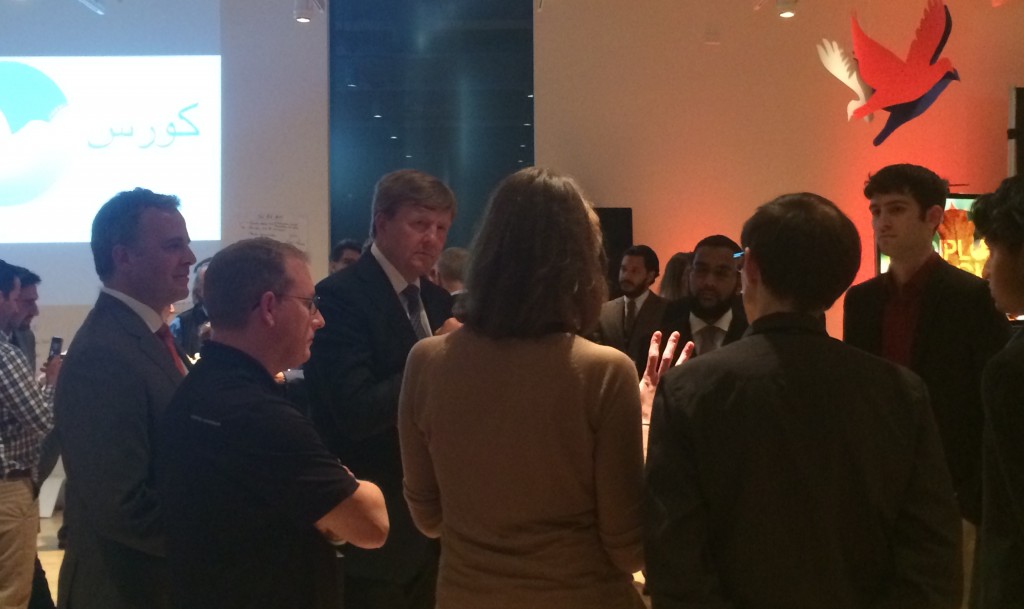 The King of the Netherlands briefed by Team D

The next day, on May 28th, I again made my way to the Museum of Nature. By 9 AM sharp, teams were wired (yes, intended) and back to the grind- participants were hovering over Macbooks, smart phones were buzzing with #HackingConflict Twitter notifications, techies were giving digital literacy lessons…the energy was infectious. All day, International Affairs students and Foreign Service officers engaged in deep discussion with media specialists and big data experts, while the Communications team connected with the wider public via social media. These interactions were not only indicative of teams’ hard work and progress over the past 24 hours, but they epitomised the evolving nexus of security and development in the Digital Age and truly embodied the power of public advocacy.

That afternoon, teams put the finishing touches on their presentations. They were tasked with pitching their solutions to a group of experts that would evaluate their ideas based on “CREDD” value: Clarity, Risk assessment, Evidence, Do-ability, and capacity to Disrupt conflict. At 3:45 PM, team-chosen representatives took to the stage à la Dragon’s Den and explained how their respective concepts would confront conflict.

The roster was impressive- bearing in mind that these ideas were in the early stages of development, teams successfully emphasised the potential of their concepts while equally recognising the real-life barriers associated with implementation: one real challenge mentioned during the presentations, which I find extremely relevant, is the ability to ensure the anonymisation of data to protect those at risk for divulging information whilst in conflict zones.

After much deliberation, the judges presented Team B: Disrupt the Chain with the winning title for their initiative on ending barrel bombs in Syria. Taking a backward induction approach to the issue, Team B proposed the creation of a crowd-sourced identification tool that allows Internet users to collectively build evidentiary support on the production and supply of barrel bombs. By aggregating documentation of every “link” on the chain, the public can encourage international condemnation and facilitate legal action against bombing campaigns in Syria.

Although the judges could only pick one winner, participants themselves awarded Team D: Truth Detective with the Peer Choice Award for its game-like app that educates youth on the verification of disinformation. There is one award left for the taking- the Vox Populi, which will be determined by an online vote. Nonetheless, it’s clear that all teams deserve a lot of CREDDit (I couldn’t resist) for their impressive collaborations! 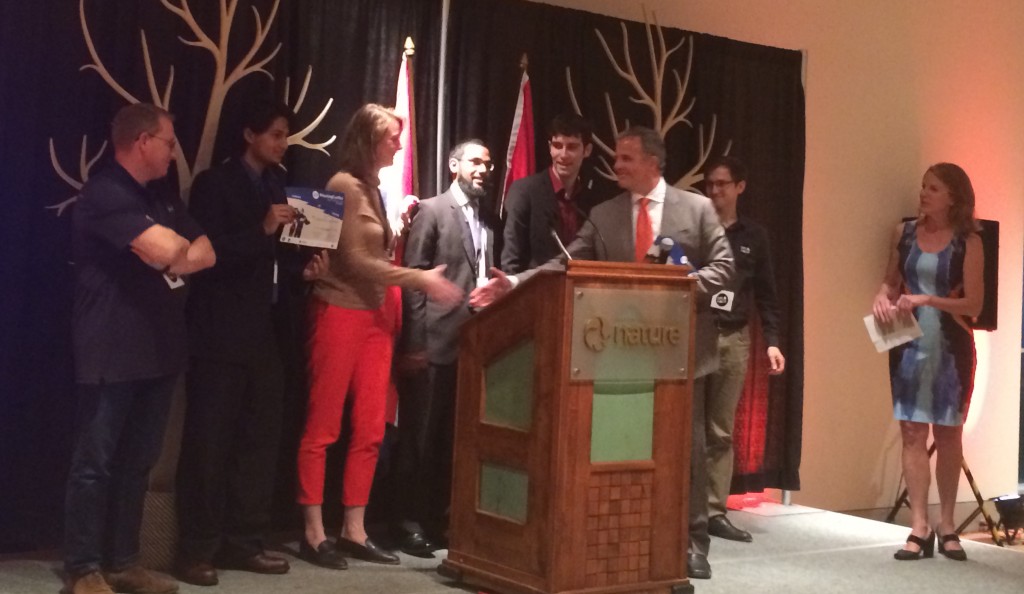 Several conclusions can be drawn from the inspiring #HackingConflict Challenge: firstly- never underestimate the power of Starbucks coffee; secondly- though the challenge focused on the initial stages of developing strategies, it highlighted the critical importance of cross-disciplinary interaction in disrupting conflict effectively; and most importantly- if all of what occurred on May 27th-28th, 2015 can happen in less than 48 hours, imagine what can be done in the future if we all thrive to become agents of change.

“My mission is to pioneer Next Generation Humanitarian Technologies”

Jessica Pichard worked as an embedded communicator during #HackingConflict, connecting teams digitally to a broader audience. All images used in the body of this post were taken by Jessica as she communicated on behalf of teams.

#HackingConflict took place on May 27-28, 2015 in Ottawa and was co-organized by the Embassy of the Kingdom of the Netherlands, The SecDev Foundation, the Canadian International Council and in partnership with the Department of Foreign Affairs, International Trade and Development. The event commemorated the 70th anniversary of the liberation of the Netherlands and pays tribute to the Canadian-Dutch bonds of friendship and like-mindedness in the field of international peace and security.