A secondary school in Vietnam’s Thai Binh province has published a list of six guidelines on Facebook behaviour for its students.

Thanh Nien Online reports the rules were published after Nguyen Duc Canh Secondary School saw several ‘clashes’ between students related to use of the social network. 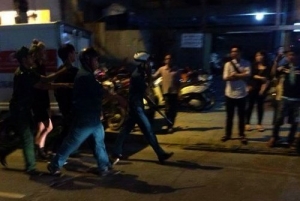 Police arrest youth at a fight arranged on Facebook.

Indeed, the newspaper subsequently published a story looking a violence and even murder among teens resulting from disputes that either originate or intensify on Facebook. In one well-known case, a major street in central Ho Chi Minh City was clogged by hundreds of youth who had arrived to see a fight between two young women that had been arranged and widely hyped on Facebook.

The story on the secondary school quotes the aunt of a female student who saw an apparent sexual reference posted by a boy and tagged with the names of over ten female students. The aunt did not even understand the slang used, and was incredulous that ‘kids today’ have freedom to say such things.

Opinion varied, however, as another person quoted in the story questioned whether a school has the right to get involved in what students do outside the classroom.

The school’s guidelines, roughly translated, are:

The above list likely stands as one of the first times a school or official institution in Vietnam has attempted to guide youth online behaviour. The Thanh Nien Online reporter even takes a bemused tone – the title of the story is essentially “Funny Facebook rules for students.”

This belies the serious nature of the issue, as Vietnam is rife with online abuse and cyber crime. The school’s guidelines are a first step and an important recognition that online behaviour is a major issue. This set of rules, however, is clearly reactive and likely ineffective given the lack of online safety integration into the education system.

A list of guidelines for students might well include basic steps such as ‘don’t friend anyone you don’t know in real life’ and warnings on how to avoid phishing and account theft. More importantly, guidelines need to be presented alongside practical learning based on real-world situations.

For example, Afamily.vn, an online news source, recently published a subtitled version of an American social experiment video that lured teenage girls into meeting an older male they had never met. The girls’ parents were invited to greet their daughters at these potentially very risky meetings. The video was reposted on the youth-focused 2! Idol Facebook Page, where it has 26,000 shares. This type of social experiment video seems a better learning tool than a list of rules. (The original version of the video, by Youtube prankster Coby Persin, has 32 million views.)

A small but growing number of Vietnamese news and youth websites are taking an interest in online safety. The Thai Binh secondary school is among the first education institutions to get involved directly. Their effort would be more effective if a broader range of learning materials were available to parents and educators.