The Homicide Monitor, a data visualization tool that charts homicide rates in countries over time, was featured in a special infographic in June/July 2015 issues of Wired (UK). The infographic is reposted here below, from the designer’s Behance profile. The Homicide Monitor was developed by our partner the Igarapé Institute in Brazil, in conjunction with The SecDev Foundation’s Director of Policy and Research, Robert Muggah. 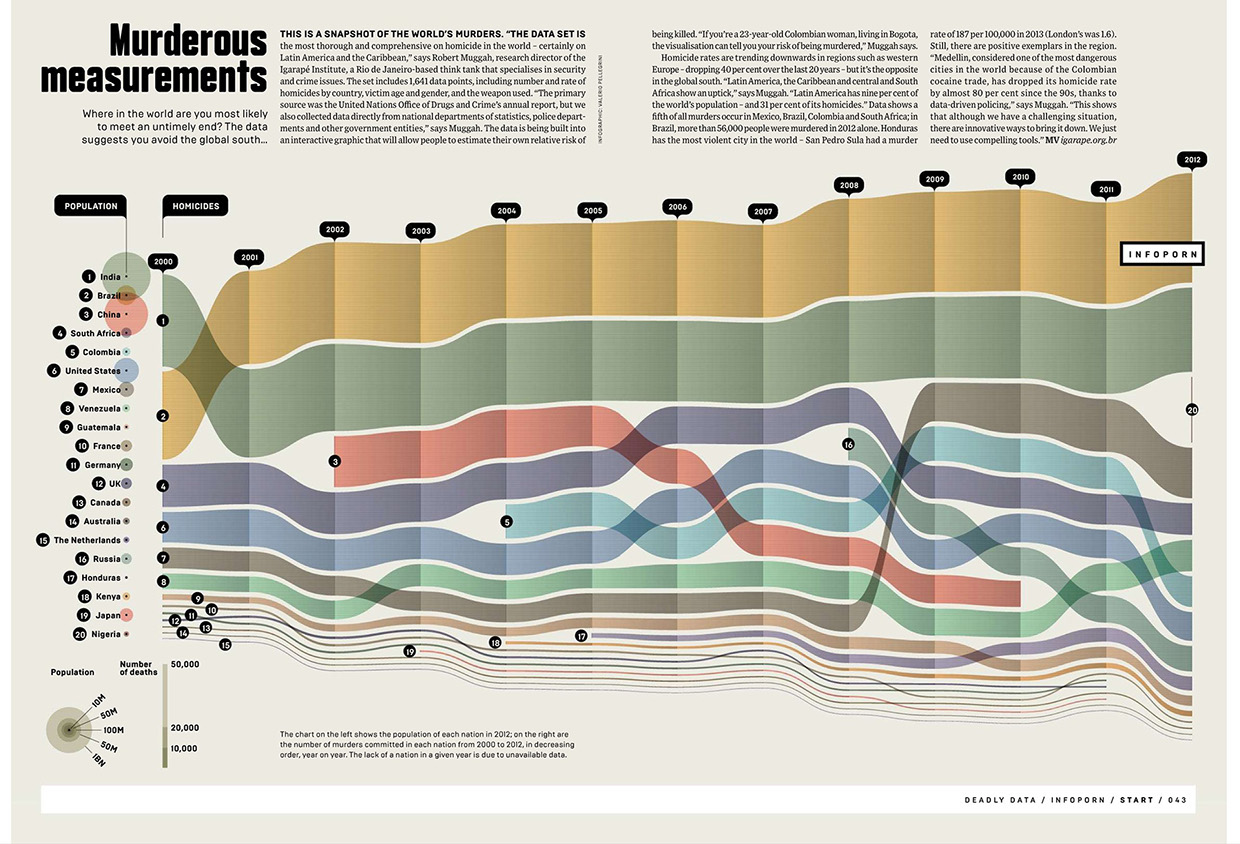 What is the Homicide Monitor?

The Homicide Monitor is an online interactive data visualization that features longitudinal information on murder on a three dimensional globe from 219 countries and territories. It breaks information down according to the absolute number of homicides by country, the homicide rate per 100,000 people, the gender and age distribution of victims, and the types of weapons used in committing murder. The Homicide Monitor also includes subnational data for more than 40 countries and territories in Latin America and the Caribbean, the most violent region in the world.

Why do we need a Homicide Monitor?

The issue of homicide is still considered taboo in many countries and cities around the world. Until quite recently, many governments were reluctant to publicize information on murder for fear of negatively affecting their country´s reputation, tourism and investment flows. Fortunately, attitudes are changing and there is growing openness and transparency about the scale and distribution of homicidal violence. The problem, however, is that information on lethal violence is dispersed and often not comparable. The Homicide Monitor brings together all publicly available information on homicide into a single interface and is intended to help policy makers, journalists, scholars and activists help identify problem areas and possible solutions.

How does the Homicide Monitor work?

The Homicide Monitor is a user-friendly data visualization tool which features a three dimensional spinning globe. It is open source and draws on the WebGL platform. Users can navigate the globe by placing their curser over countries (and in the case of Latin America and the Caribbean, states and cities). Information on the total number of homicides, the homicide rate and ratios related to gender, age and weapons is featured on the left-hand side of the screen. Underlying datasets are also available to users, unless indicated as unavailable or incomplete.

Where does the data come from?

The underlying dataset for the Homicide Monitor draws from a number of verified and trusted sources. The primary source of national homicide data is from the United Nations Office for Drugs and Crime (UNODC) which collects information from governments around the world. Detailed information from Latin America and the Caribbean (disaggregated by age, sex, type of weapon and state/city) was gathered by the Igarapé Institute from primary sources (such as police, ministries, national statistical offices). Other sources of national data were also identified including those supported by the Organization of American States (OAS) Observatory for Citizen Security.

What kinds of limitations are there in the data?

There are several challenges in developing international datasets on homicide. For one, different countries categorize and count homicide differently. For example, many statistical offices distinguish between intentional and unintentional homicide. In some countries, homicides are only counted after an arrest and prosecution is made. In others, homicide counts are based on coronary reports. As a result, in some settings homicide data may also include other types of violent death including accidents, suicides, terrorist incidents and even war-related deaths.

As such, it is important to standardize the definition of homicide across countries, states and cities. This is not straight-forward, though every effort was made to only include “intentional” homicides in the Homicide Monitor. Indeed, information included in the Homicide Monitor corresponds to the “official” count registered in primary sources. Igarapé Institute researchers often triangulated multiple counts, virtually always selecting the most conservative registered figures. As a result, there is a possibility that the Homicide Monitor undercounts the total scale of homicide.

Another limitation relates to the availability and quality of homicide data. While the Homicide Monitor is the most complete dataset currently publicly available, there are nevertheless gaps. There may be gaps in the time-series. There may also be limitations in relation to disaggregated data, whether according to gender, age or the instrument used. In some countries, there are even more profound gaps associated with the overall population denominator, making the determination of rates or frequencies especially tricky if not impossible. For more on the issue of homicide data quality, consult the UNODC Global Study on Homicide.

A number of countries also simply lack the capacity to register all homicides, and as a result victims go “uncounted”. Other countries do not report the data they have, thus requiring the use of alternate sources or even estimates (all of which are clearly marked in the Homicide Monitor). These limitations increase especially in Africa and a number of conflict-affected countries. In extreme cases, information is unavailable from either criminal justice or public health sources. In these cases, WHO has modelled homicide rates based on a wide variety of variables. These estimates should be treated with caution.

The Homicide Monitor is fully transparent about the sources of the data together with their completeness. Where data in unavailable, it is marked as such. Where data is from the WHO as compared to the UNODC, this is stated clearly. In the future, where data quality or availability is uncertain, as is the case in some countries affected by armed conflict or where publicly available information is collected in non-transparent fashion, this will be explicitly noted. The Igarapé Institute welcomes comments and clarifications on alternative information sources and datasets.

What about war deaths?

The Homicide Monitor does not on draw sources counting deaths directly associated with military operations in civil or inter-state wars. It is of course very difficult to disaggregate homicides taking place in the same place as an armed conflict from deaths due to warfare. Therefore homicide counts and estimates from countries affected by armed conflict should be viewed with caution. A lengthy discussion on these issues can be found in Chapter 6 of the UNODC’s 2013 Global Study on Homicide. A global dataset of ‘battle deaths’ caused during warfare is maintained by Uppsala University. Since the data has been compiled using different methods and sources it is not directly comparable to the data used in the Homicide Monitor.

What are the Homicide Dispatches?

While the Homicide Monitor provides information on trends and pattern it does not interpret or analyze the data for users. By way of contrast, the Homicide Dispatches will be prepared by international experts to explain the story behind the data. Specialists in criminology, public health, and other social sciences will contribute short analytical contributions highlighting the underlying causes and far-reaching consequences of murder, ways that governments count homicide, and innovative strategies to prevent and reduce intentional violence.

Who developed the Homicide Monitor?

The Homicide Monitor is a project of the Igarapé Institute, a think and do tank based in Brazil. It was developed with support from the Open Society Foundation (OSF) and the Peace Research Institute Oslo (PRIO), with assistance from Norway. Design inputs were provided by Periscopic. The Igarapé Institute team led the overall development of the Monitor. National data was supplied by the UNODC. Additional sources of information for Latin America and the Caribbean were sourced from governments around the world, as well as the WHO and OAS. The underlying dataset of the Homicide Monitor is overseen by the Igarapé Institute and will be periodically updated to ensure that the tool is up-to-date.