Rio de Janeiro’s mayor has announced new funding and a new name for a program meant to complement the city’s police “pacification” with increased social services, but it will take more than a facelift to overcome criticism of the initiative.

In mid-July, war broke out in the Complexo do Alemão, a large group of favelas located in the north of Rio de Janeiro. Angry at the arrest of one of their number, gunmen from the local street gang opened fire on the Pacifying Police Unit (UPP) station.

The favela, which was one of the first in Rio to host a UPP, closed down. Schools cancelled classes indefinitely, and children stayed home. The police presence was doubled and local media warned of a battle being waged between armed criminals and UPP forces. International papers like the Wall Street Journal openly questioned whether the renewed violence meant that one of the flagship communities of Rio’s pacification strategy was slipping back under gang control. 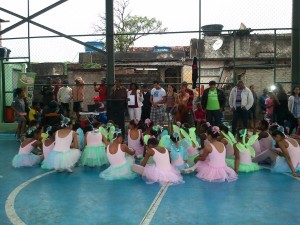 Despite the violence nearby, on July 26 organizers in the community of Morro do Adeus — located on the east edge of the Alemão complex — went ahead with plans for a “sports and cultural fair,” held at a basketball court that the mayor’s office had completed just two months prior. As the adults looked on, two dozen young girls dressed in pink performed a well-rehearsed group dance. This was followed by a martial arts demonstration by solemn-faced local youths.

When the music stopped, Danusia Tomas, president of Morro do Adeus’ neighborhood association, addressed the crowd. After praising the performances, she turned to representatives from the mayor’s office, who were grinning from the sidelines, and thanked them for their support for the event. Turning back to the audience, Tomas urged a round of applause for the event organizers and the community effort in general. “This shows that we also have culture,” said the community leader. “That we are not just some ‘favelados’ [a highly derogatory term for favela residents].”

As Morro do Adeus’ culture fair drew to a close, the afternoon wind picked up. On a nearby telephone poll, a faded flyer for the event fluttered in the breeze. At the bottom, where the culture fair’s sponsors were listed, the words “UPP Social” could barely be made out. 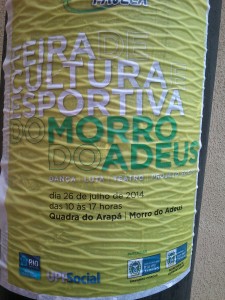 The UPP Social program was initially presented directly alongside the policing part of the pacification initiative. Billed by Rio state Governor Sergio Cabral as part of a strategy to improve services and foster democratic inclusion in the long-neglected slums of Rio de Janeiro, it was designed as a natural counterpart to the UPPs. While extended occupation by military police was the stick, UPP Social would be the carrot, building a positive state presence in these crime-plagued areas.

At least, that was the idea. Soon after the 2010 elections, the state government abandoned UPP Social. It was passed on to the city government, which, it was argued, was better positioned to implement social programs on a municipal level. The program was taken up by thePereira Passos Institute (IPP), a city planning think tank created in 1998.

In a video, the IPP advertises three main goals of the UPP Social initiative: to collect data on the needs of pacified communities, to provide basic public services, and to promote economic development by working with local entrepreneurs.

But despite its lofty goals, development and security analysts are largely skeptical of the lasting impact of UPP Social. Most agree that the program has focused disproportionately on documenting and mapping needs, while there does not appear to be as much emphasis on actually following through and delivering services.

In an email to InSight Crime, Muggah asserted that while UPP Social had made some important contributions, it was doomed from the start. “There were some clear objectives set out in terms of recovering territory, promoting proximity policing, incentivizing improved community relations, and extending services, but the details were never clearly articulated,” wrote Muggah. “The notion of a UPP and a UPP Social emerged in a way by default, and not so much by design.” 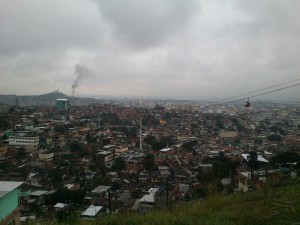 Dr. Ignacio Cano, director of the Rio de Janeiro state university’s Laboratory of Violence Analysis, was even more blunt in his criticism of the program. “The UPP today is a police program, and the ‘social’ part is a decoration that hasn’t changed the quality of life in communities,” Cano said.

According to Cano, the program wasn’t implemented as promised, as the city has largely failed to deliver increased social investment programs in pacified areas. And even if it had been, the researcher believes it likely would have done more harm than good. “It would have raised disparities between some communities that were pacified and developed, and left the periphery poor and violent. I think that it would have increased inequality, as the UPPs have been installed mostly in areas of the city center and the southern, more touristy areas,” said Cano.

But for residents of Morro do Adeus who attended the recent cultural fair, the program has had definite benefits. “Before our kids never had things like this, events like this. They need places where they can play,” said resident Josi Mello. “A few years ago this area was a war zone; there were constant battles.”

However, while some locals say they have benefitted from an increased state presence since pacification, others acknowledge that tensions with police still run high. Tomas, the resident association president, claimed that even though UPP Social is unaffiliated with security forces, the name has scared more than a few potential participants from community events.

“We have to make it clear to the community that the UPP Social is doing social work, it doesn’t have anything to do with the police,” said Tomas. “The truth is we have some complaints about very aggressive police in the community. They never want social work. They want combat.”

Rio Mais Social: A Facelift or a New Focus?

At least in part because of criticism like this, the city has begun “rebranding” UPP Social, cutting its ties to the police pacification strategy by giving it a new name. 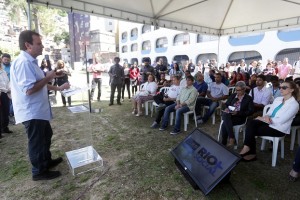 On August 9, Rio de Janeiro Mayor Eduardo Paesannounced to journalists gathered for a press conference in the sprawling favela of Rocinha that UPP Social would be replaced by a new initiative, known as Rio Mais Social.

“What the city has done, is doing and will do in pacified areas was not well understood by the population,” said Paes. “With Rio Mais Social, our goal is to provide this information to all in a consolidated and transparent way. Enough of speculating that crime is growing because there are no public services in these areas.”

Criticism of the UPP Social initiative, according to the mayor, is off base. Paes told reporters that his office had spent around $800 million on projects that had benefitted more than 700,000 residents since the pacification initiative was launched in 2009. During that time, the percentage of residents in pacified favelas who were covered by the city’s family health care program grew from three to 73 percent, he said.

In the coming days, the mayor claimed, the city would be investing roughly $400 million dollars in the new program. The money would be used for new schools, clinics, and infrastructure projects in pacified areas of the city.

The announcement is, by any measure, a positive development. At the very least, dropping “UPP” from the name should make it easier for the Pereira Passos Institute to continue mapping local needs and sponsoring community events.

But whether a new name and the increased funds will really bring the integration promised to pacified communities is a different question. If officials hope to foster inclusion in these communities, they will have to deliver in areas where many residents are intensely skeptical of the city government. In Alemão,water service remains spotty, and low water pressure is common. In Rocinha — where raw sewage flows through open canals — residents routinely complain about the quality of sanitation, even as the mayor’s office presses ahead with plans to build an expensive cable car system there.

Theresa Williamson, a Brazilian-American who directs the NGO Catalytic Communities, which works in favelas throughout the city, is not optimistic. She believes that the city government simply lacks the political will to follow through on its promises to the most neglected residents.

“In Brazil, there’s the saying, ‘for the English to see,” Williamson said, referring to an expression that has its roots in an 1826 British-Brazilian treaty meant to end Brazil’s slave trade (which actually continued for another 60 years). For her, UPP Social and other development programs are the “modern version” of this arrangement. “There are these programs on paper, and they all sound great, and authorities will talk as if they are implementing them. But what we actually see in the ground is that that this just isn’t happening,” said Williamson.

In the Alemão complex, the level of violence receded about a week after the first attack on the UPP. Schools were re-opened, and public transportation began working as normal. However, for many residents, the outlook for neighborhoods there remains bleak.

Extra reported that on August 9 a small crowd of some 50 people held a march through several communities in the complex where recent shootouts between gang members and police had occurred, stopping several times to mark spots where locals had died. During the march, participants chanted slogans demanding not only an end to violence, but also better health and social services.

One local woman told Extra: “We want peace in the neighborhood. We’re just like any other citizens: we pay our taxes and we just want to live in peace.”

Ultimately, residents need to see real peace in their allegedly pacified communities — a peace that extends beyond an absence of violence to include basic services enjoyed by citizens in more central parts of the city. If Rio Mais Social does not move toward achieving this, it is hard to imagine that responding to waves of violence by continuing to dispatch more military police will ever succeed in rooting out the gangs that thrive in Rio’s periphery.