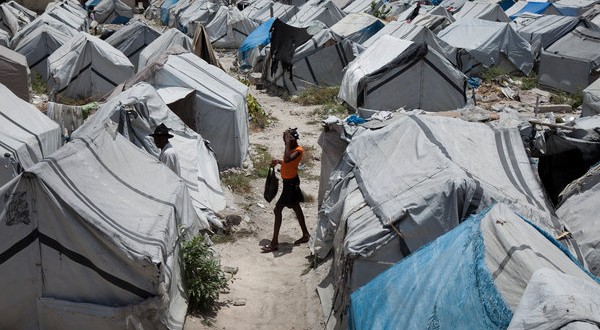 A TEXT MESSAGE was the first sign that something was wrong. In the week after Hurricane Sandy hit Haiti, our research team was assessing post-disaster crime, food security and service provision. The message came from a Haitian researcher in our group, an enthusiastic and talented graduate student whom we’ll call Wendy. She had been walking alone a few blocks from our hotel when she was forced into a house and brutally raped.

We quickly located a doctor but he refused to examine Wendy, saying she needed to be seen by the authorities first. We then contacted the police, and after a grueling interview in which one officer repeatedly asked Wendy, “What did you do to make him violate you?” the police said she was free to be examined. The doctor, however, couldn’t be found.

Although Haiti routinely suffers from political and natural disasters, rape is an especially insidious crisis. Haiti’s brutal dictatorships used rape as a political tool to undermine the opposition. A 2006 study reported that some 35,000 women and girls in Port-au-Prince were sexually assaulted in a single year. In the aftermath of the 2010 earthquake, residents of the capital’s tent cities were 20 times more likely to report a sexual assault than other Haitians.

Haitian prosecutors are reluctant to pursue charges against rapists unless a victim is examined by a doctor within the first 72 hours to “certify” the assault, but few victims are able to satisfy this requirement. The police referred Wendy to a state-run clinic in the nearest large town, a three-hour drive over washed-out roads. When Wendy arrived she was told the doctor was out. A nurse mentioned that he could be found at a private clinic nearby.

It had been more than 16 hours since the attack. Wendy hadn’t slept or bathed. Her clothes were ripped and dirty. Dried blood matted her hair where the rapist had slammed her head against a wall. The doctor wanted verification from the police that a sexual assault complaint had been filed before he conducted an examination to retrieve fluids left by the perpetrator. The police were called but they claimed a “fee” was required before they would release a copy of the sexual assault complaint.

A women’s rights organization in the capital suggested we pay a bribe and complain to the policeman’s superiors later. Our colleague drove several hours back to the town where the assault had taken place, paid a $25 bribe, and waited while the officer wrote up a report that merely stated that Wendy had lodged a complaint against a particular man but not that she had been raped by him. After some argument, the officer agreed to include the allegation of sexual assault.

It took more than 24 hours before Wendy finally saw a doctor who admitted he’d never been trained to examine a rape victim. She cried the entire time. Random individuals wandered freely in and out of the room during the exam, including patients, nurses and a man visiting his sick wife in an adjacent bed.

In North America, rape victims are often given medication to fight possible exposure to sexually transmitted disease as well as the morning-after pill. Wendy was terrified of pregnancy. She declared that although she didn’t believe in abortion, she would rather “die” than have “that man put a baby inside of me.” Wendy knew about the morning-after pill but wasn’t aware if it was available or legal in Haiti. The doctor falsely told her that after 24 hours it was too late to use it.

After Wendy’s exam, the police refused to pick up the medical report or fluid samples collected by the doctor. Instead, she was told to take them to a state-run medical clinic for sexual assault victims in the capital, a 15-hour drive away. The doctor then demanded an exorbitant fee for the medical report. The final document stated simply that Wendy had complained of being raped and was found to have evidence of sexual activity. No record was made of the bruises covering her thighs or the many lacerations on her body.

BEFORE Wendy could shower, she had to return to the small town where the assault occurred for yet another interrogation by the police. Our colleague, meanwhile, was scouring pharmacies for the morning-after pill. He finally tracked down a pharmacist who knew what it was. But the medication, like most pharmaceuticals in Haiti, was imported. The instructions were in Arabic and Portuguese, neither of which the pharmacist could read. He didn’t know which package contained the morning-after pill and which contained hormones taken by post-menopausal women. Nor did our colleague, who closed his eyes and picked a box, which by chance happened to be the right one. After taking the pill, Wendy slept for the entire ride to Port-au-Prince, helped into oblivion by the glass of homemade gin the doctor had prescribed.

We had no intention of sweeping this incident under the rug. We contacted the police, women’s rights organizations and various government ministries. We spoke with the police chief from the area where the assault had taken place. He said he had questioned the perpetrator, who claimed that Wendy had had sex with him willingly. Because the medical report made no mention of violent assault, the police officer in charge, who had seen her bruises and cuts himself, said there was nothing he could do.

Calls to the women’s rights organizations and other civil society groups confirmed that there was little to be done. “You could pay something, give them a gift so they arrest the guy,” one human rights worker suggested. “But he’ll probably just pay another bribe and get out.”

For decades, Haitian victims were blamed for inviting rape, and seldom spoke out. Politicians and the media perpetuated these stigmas. So did the law: a woman’s testimony that she didn’t consent to sex was insufficient for conviction, and monetary restitution or marriage to the rapist was considered a solution. A 2005 law made rape a punishable offense after intense lobbying from survivors and the Haitian Ministry of Women’s Affairs. In 2010, the law was updated after chilling reports of rapes committed against the elderly and children.

But old habits die hard. In Haiti, attitudes toward rape are similar to those that were common in the United States before the 1970s and ’80s. Haitian officials often claim that residents of slums and displaced person camps are promiscuous. Despite new laws, few women will ever report the event because of the prevailing social norms that blame victims for their own assault. Even fewer survivors will be in a position to navigate the complicated procedures to bring charges against a rapist.

Having an education, money and connections doesn’t necessarily help. By the time Wendy returned to Port-au-Prince she wanted only to return to her family. Her mother thanked us for getting her medical attention and asked that we never mention the rape to Wendy again. Wendy said she just wanted to forget about it.

She blamed herself for walking alone, for wearing borrowed pants that were too tight, for smiling and saying hello when the man first approached her, for freezing up and not screaming when he attacked her. Despite her education, resilience and dedication to fighting violence against women, Wendy could not bring herself to face the grueling road of rape prosecution in Haiti.

So she dropped it and asked us to do the same. When we told the women’s rights group she didn’t want to pursue a case, they weren’t surprised. “It happens all the time,” said a member of the staff. “We get dozens of cases each month, and out of those sometimes not even one woman will put herself through this process.” It is hard to blame them.

Athena Kolbe is a researcher from the University of Michigan School of Social Work and co-director of a social work institute in Pétionville, Haiti. Robert Muggah is the research director of Brazil’s Igarapé Institute and a professor of International Relations at the Catholic University in Rio de Janeiro.