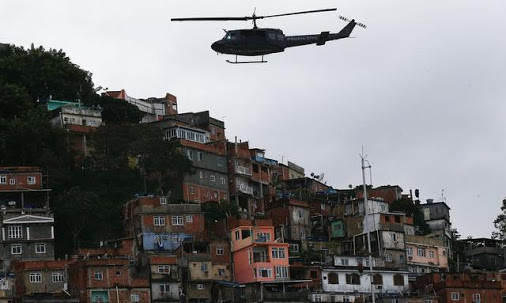 With the World Cup coming to town this month, Brazilians are busily preparing for a party. But keep your wits about you if you want to join in — these are dark days for Brazil.

The country now registers the highest homicide rate in almost three and a half decades. According to recently released data, 56,000 citizens were violently killed in 2012. And 15 of the world’s 50 most dangerous cities are located there. Hardly surprising, recent polls suggest that security tops Brazilians’ agenda as the No. 1 concern, ahead of education and health.

With all this bad news, you might think the federal government is busily preparing a national strategy to improve safety. You would be dead wrong.

What is especially tragic is that the latest surge in lethal violence was entirely preventable. At the beginning of the first decade of this century, homicide rates were steadily declining from roughly 28.9 to 25.2 per 100,000. But just before the tenure of the current administration of President Dilma Rousseff, it began rising once more.

This is partly because the federal government began systematically dismantling the country’s public-security apparatus. For example, the national public-security program known as PRONASCI wasdefunded shortly after the president’s election, resulting in less money for gathering evidence, reforming the police and fixing the country’s appalling prisons and preventing violence.

It was not supposed to be this way. In 2011, President Rousseff campaigned on a pledge to establish a national plan to reduce the number of killings. Her proposals were quietly set aside the year she took office. Instead of focusing on problems at home, she launched a plan to bolster Brazil’s defense industry, already the largest in Latin America. She introduced new subsidies for the country’s largest companies to get on-board. Brazil today is now the second largest exporter of firearms and ammunition in the Western hemisphere, with many of them used in the country’s killing fields.

Notwithstanding growing pleas for a new approach to public security, the government does not appear to be listening. During massive street protests in 2013, insecurity was cited as among the top priorities. and yet President Rousseff’s five-point plan in response to the demonstrations patently ignored the issue.

Even the previously existing federal program — Brasil Mais Seguro — has failed to register any meaningful domestic improvements, focused as it is on securing Brazil’s border and prosecuting a war on drugs. Instead, the president shrugs off criticism observing that public security is the preserve of Brazil’s 27 states. Yet with Brazil’s murder rate almost three times what the United Nations classifies as epidemic, the federal government cannot simply stand by and watch.

Brazilians must put public safety and security at the center of the October 2014 presidential elections. At a minimum, the federal government needs to assume a greater responsibility and put a premium on preventing lethal violence.

Preventing homicide and strengthening investigatory and prosecutorial capabilities has to be made a higher priority.

This will require structural reforms to the policing, judiciary and penal systems, including unifying national data collection systems so capital crimes can be identified and punished.

The federal government should set clear standards and incentives for states to improve their record.

If Brazil is to make a real dent on reducing lethal violence, the federal government must own up to the sheer magnitude of the problem.

Too often it skirts the issue at home and downplays the challenges it faces in international forums. Butnew research by leading experts in several major Brazilian cities such as Belo Horizonte, Recife, Rio de Janeiro and Sao Paulo shows that improving security is possible.

If the country is to make real progress, the federal government must implement strategies that value life rather than pursuing a policy of inaction.